EURO MED CHALLENGE GAME TWO
Rugby League in Belgium received a terrific boost when their representative side defeated a Catalonia XIII 28-22 in Wavre, in the second match in the Euro Med Challenge. The Belgium XIII now travel to Beziers on the 15th August to face a Morocco XIII to decide the competition winners. Belgium registered their maiden victory in an exciting clash, showing great spirit to come from behind against a well organised Catalonian outfit.

The visitors took control of the match in the first half but the hosts dominated thereafter, second rower Tyler Gagnon powering over for the winning try two minutes from time. After impressive right winger Jean Mo Outara's fourth minute opener, the Catalans bossed the show, taking advantage of a mistake-ridden performance from the Belgians who seemed to be suffering from stage fright in front of a vocal 400-strong crowd.  Big prop Tchoumi Calvin stretched over to touch down between the posts in the 8th minute for Catalonia, then hooker Joan Petanas crossed five minutes later. The Belgians scored against the run of play through man of the match Jouad Samsam but the Catalans, benefitting from multiple sets in possession, deservedly restored their two-score lead through centre Joan Pablo Pistone on the half hour mark.

The second half saw the visitors wilt considerably, while the well conditioned Belgians upped their physical contribution. Three unanswered tries from Outara, stand off Hadrien Radelet and Samsan - the second of which was set up by a 70-metre, defence-splitting break from the winger - put them 24-16 up. The Catalonians, despite a strong stint in the forwards by Oscar Merce, struggled to clear their lines or hold the big Belgian forwards, led impressively by second rower Gagnon and player/coach Eric Delreux. Despite their ascendancy, the Belgians were still racking up the error count which enabled the visitors to stay in the contest and when Pistone bagged his brace with eight minutes remaining the gap was down to two points.

The crowd reached fever pitch in a frantic finale to an, at times, brutal match which had seen a handful of players leave the field streaming with blood. With time running out, Gagnon capped a stellar performance with the final score and a desperate kick downfield in the last minute by the Catalonians came to nought as they desperately sought to level.

“We played better against Morocco” commented Catalan president Sergi Blazquez, “but I was pleased with the team's performance. The Belgians were very good and better than we expected.” Marc Delreux was absolutely delighted with the outcome: "We defended 18 tackles on numerous occasions but our fitness and defence were both very good,” he said. “Our players are learning how crucial small mistakes can be but we are all pleased that we hung on for the win.”

Belgium XIII will now play a Germany selection next week before taking on the formidable Maroc XIII in what should be another no holds barred contest. 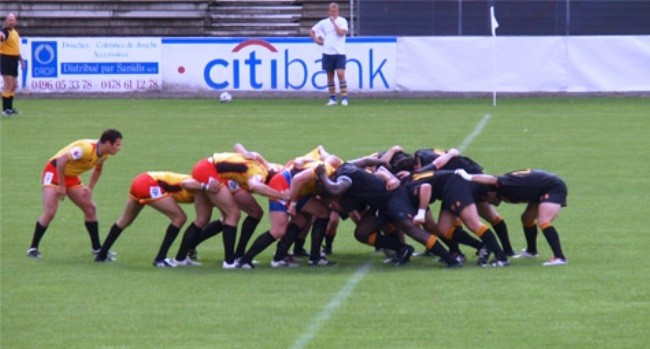