France secured their first win over Wales in 24 years, winning 38-16 in the European Cup final. It took just two minutes for France to register their first score. An excellent passing move culminated in Julien Rinaldi setting up Barrow's Frédéric Zitter in the corner. Laurent Frayssinous' conversion was just centimetres wide of the target.

Wales came close to an equaliser in 10th minute. From dummy half, Damien Gibson set up Aled James but, under pressure, he dropped the ball while diving for the line. James knocked on again just minutes later, leading to a French attack but they were unable to capitalise. Rinaldi's attempt at a 40-20 failed and was also too far for Zitter to save possession. Gareth Dean's sinbinning for an over the top challenge in the 16th minute immediately led to a second French try. Teddy Sadaoui set up Zitter who took advantage of the gap and easily ran in his second try. This time, Frayssinous made no mistake and France were 10-0 up.

Four minutes later, France extended their lead in a classic display of rugby league. Christophe Moly started the move at dummy half, set up danger-man, Rinaldi who played a neat one-two with Frayssinous to get past the Welsh defence and grounded just wide of the sticks. Frayssinous easily converted. The lead could have been extended yet again in the 26th but Moly's grubber kick was just too far for Rinaldi. With Wales now back to full strength, they finally got on the board from the resulting attack. On the fifth tackle, Mark Lennon set up Adam Hughes who ran the ball over. Lee Briers converted.

France regained their advantage on 33 minutes. Rinaldi again was the playmaker laying the ball of beautifully to Sadaoui who charged through the Welsh defence. Frayssinous' conversion attempt hit the post. France were applauded off at half-time after going 26-6 up after Frayssinous set up Guisset to score. Frayssinous easily converted.

Wales opened the second half in convincing fashion with an Adam Hughes try in the corner. Briers missed the conversion. Wales' spirits were lifted. Briers broke through the defence to score in the 47th minute and converted to take the score back to 26-16. Following Briers' sinbinning, France fought back and got close to the line. Substitute, Sébastien Raguin led the charge but Zitter knocked on from a Guiset pass. Wales also went close in the middle of the second half. Jordan James was held up a metre from the line and Phil Joseph was stopped ten metres out on the next attack.

But when Jérôme Guisset broke through the Welsh defence on 66 minutes to score, there was no doubt that the European Cup was to go back to France for the first time in 24 years. Olivier Charles could have added to the score but for a try-saving tackle by Damien Gibson. However, a length of the field move involving Zitter and Frayssinous put the icing on the cake for the French. Charles ran the ball home and Frayssinous converted.

Wales captain Lee Briers was unhappy at being sinbinned and commented: "I now realise why the Australians sometimes complain about the choice of officials. I also think it was wrong that we had local touch-judges with no Super League experience. Everyone needs to sit down and have a good look at the rules of the tournament and the reason why the British teams had to have three Conference players in the tournament and the French didn't."

Wales coach Martin Hall said: "Our efforts considering what we were up against was excellent. The French were a solid and well-drilled outfit but at times it felt we were up against 14 men. In fact, considering we played 60 minutes of the game with 12 men, I think we came out of the came with credit. I'd like to thank the Welsh management and players for all their efforts. Everyone has given 100%." 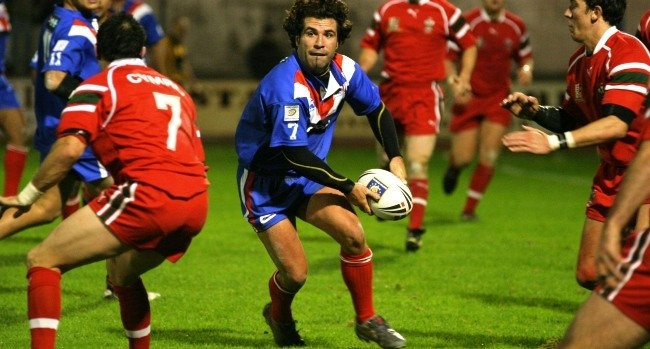