EUROPEAN CUP QUALIFIER
Georgia won the inaugural European Cup Qualifying Tournament with a superb 44-12, eight try victory over Serbia in front of over 8,000 wildly ecstatic fans in the Dynamo Stadium in the nation’s capital Tiblisi on Sunday evening.

The match, which was broadcast live on national television, was watched by European Nations Tournament Director Graeme Thompson and Development Officer Kevin Rudd and initial indications are that the pair will recommend the Georgians inclusion as the sixth team in this autumn’s full European Cup subject to off field guarantees and assurances.

The first international to be played on Georgian soil saw the crowd treated to a spectacular pre-match show with local singers and dancing preceding a huge firework display which appeared like a waterfall of fire over the roofs of the oval stands. The crowd became even more animated when the host side performed their traditional ‘haka’ before putting on an outstanding display.

For the Serbians, who were competitive throughout, London Skolars scrum half Zoran Pesic and Nemanja Popsogorovic touched down with Dalibor Vukanovic, who is also on loan in the capital, kicking two goals.

Graeme Thompson commented, “The quality of the play was outstanding in what was a truly marvellous spectacle. We will be doing everything we can to help the code grow and prosper in the republic because it appears the demand for the sport is here.” 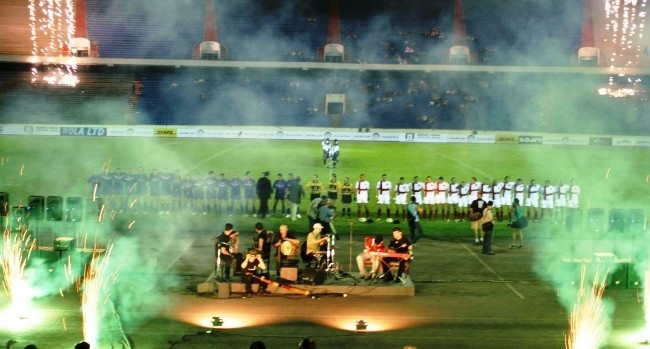