Lebanon fought themselves to a standstill over a bruising 80 minutes but could not overcome a tough and disciplined Samoa at the Chris Moyles Stadium in Featherstone. The 38-16 loss marks Lebanon’s first international defeat for seven years and the end of the Cedars’ World Cup 2008 campaign as Samoa took the 10th and final place in next year’s finals. Lebanon had suffered the loss of Anthony Farah before the match, forcing coach Darren Maroon to shuffle his side. Toufic Nicholas was pushed forward to stand-off and Adnan Saleh dropped back into fullback, a position he filled with aplomb, making some brave forward runs, secure catches and a number of crucial try saving tackles. Danny Chiha came off the bench to start at centre, and newly arrived forward Daniel Sayegh augmented Lebanon’s forward pack.

The Cedars lined up against a solid Samoa side with plenty of size, skill and experience, with ex-New Zealand internationals such as skipper Nigel Vagana, and Super League and NRL veterans such as the Puletua brothers Frank and Tony, Leeds second row Ali Lautiiti, front rowers Phil Leuluai of Salford and Hutch Maiava or Hull, and St Helens centre Willie Talau. The game started well as the Cedars forced back Samoa touch in goal to force a goal line drop out, but then knocked on in the first tackle of the repeat set to let Samoa off the hook.

Samoa began to punish Lebanon with a series of hard hit ups and prolonged possession as Lebanon once again displayed a nervousness that was to cost them dearly. Penalties again blighted Lebanon, and 5 minutes in Samoa drew first blood from a penalty goal in front of the posts. It was the first of Penrith Panthers and former Australian Schoolboys back Joseph Paulo’s seven successful kicks, while Lebanon was unable to convert any of their four attempts on goal. Two minutes later Samoa managed to add a try as their go forward carried them in front of the Lebanon posts. Hooker Chris Vaefanga bored in from the play the ball as the defence rushed out to smother the first receiver. Paulo converted to give Samoa an 8-0 lead after 7 minutes.

It was not the start Lebanon had been hoping for. Things got worse as more penalties again gave Samoa field position and 11 minutes in a skilful offload allowed full back Tangi Ropati to score just to the right of the posts, leaving Paulo another easy kick. Lebanon finally got some ball, and on 18 minutes Lebanon’s outstanding scrum-half George Ndaira put in a delightful chip for 2nd row Philip Tatchi to juggle tantalisingly before securing the ball and diving in to score to the right of the posts to edge Lebanon to 14-4.

Samoan immediately reapplied pressure and a strong attack was thwarted desperately as Tom Joseph dragged Samoa’s wing into touch inches from the left hand corner. Then disaster struck. Having repulsed another Samoan attack, Lebanon’s tiring pack were caught off guard, hurled backwards in the scrum by the giant Samoans who gathered the ball and fed Nigel Vagana who dove in from 10-metres out.

With 8 minutes to go in the half, Samoa continued to pile on the pressure and a slippery kick behind the Lebanon defence allowed man of the match Paulo to grab a try to the left of the sticks, this time leaving the kicking duties to Frank Puletua, who converted to leave Lebanon trailing 26-4. Adnan Saleh restored some hope to Lebanon when his run down the left flank opened up Samoa, releasing Adham El Zbaideh to score in the corner after enterprising work from Jamie Clark and Nicholas. The latter dropped the conversion just short leaving the score at 26-8. A fairly woeful first half for Lebanon ended as it had begun with Samoa being awarded a penalty in front of the Cedars’ posts 30 seconds from the half time hooter. Samoa elected to kick and scored another two-points to go into the break with a seemingly insurmountable 28-8 lead.

The numerous Lebanon fans inside the Chris Moyles stadium, both Lebanese and neutrals, urged the Cedars to come out fighting in the second half, but it was again Samoa who got off the mark first as winger Andreas Bauer scored a 45th minute try, with Paulo unsuccessful for the only time. Danny Chiha responded for Lebanon 5 minutes later, also going in on the left off a lovely short ball by captain Chris Salem, who tied Charlie Nohra’s record of 20 international caps for Lebanon. George Ndaira’s kicking again opened up the Samoans.

Tommy Joseph used his pace and an immaculate bounce to collect the ball at pace and cross the line to score 10 metres in from the right corner. Jamie Clark attempted the conversion but pulled it just wide to the right. 32-16. The Cedars managed to sustain pressure on the Samoan side for the first time in the match going into the last 20 minutes, but were unable to convert the pressure into points as space repeatedly ran out and Samoa’s defence scrambled to cover any cracks. Chris Salem, Tommy Joseph and Frank Samia all threatened down Samoa’s right, but could not force their way over the whitewash.

After sucking up the Lebanese pressure Samoa again marched downfield and forced their way over as Hull prop Hutch Maiava blasted over to score with 6 minutes remaining, allowing Paulo to kick his last goal of the night and to leave the final score at 38-16. Lebanon left the field to a standing ovation and thanked the crowd for their warm and constant support.

Maroon stated afterwards that “rugby league is a game of character and Lebanon have revealed great depths, recovering from a poor performance and devastating result against Ireland to bounce back to a thrilling victory against Wales. We have battled gallantly right to the end against a Samoan side packed with seasoned professionals and could have won if things had gone a little better for us tonight. We didn’t really play as well as we can, but we still gave Samoa a great fight for 80 minutes.” Maroon played in the 2000 World Cup and reckons things have come on a long way since then. “Lebanon’s quality has undoubtedly improved since those days. That combined with the great strides being made by the game in Lebanon itself means that Lebanon Rugby League and the Cedars are here to stay, World Cup or no World Cup.” 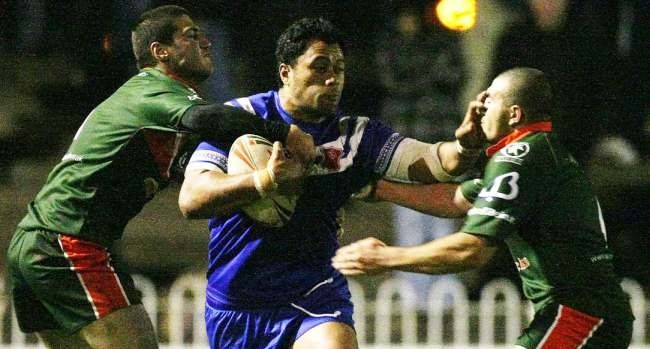