Stuart Littler's injury-time try saw Ireland salvage a point in their World Cup 2008 European Group Two qualifier. The visitors held a shock 10-0 lead at half-time thanks to tries from Daniel Chiha and John Koborsi. But Ireland fought back with Scott Grix and Ryan Tandy (pictured) crossing in the first six minutes of the second period.

Chris Salem raced 80m for a brilliant solo try to put the Cedars back in front until Littler's effort, converted by Chris Bridge, saved Irish blushes. Ireland coach Andy Kelly had mixed emotions after a pulsating game at Tolka Park.

"I'm disappointed and relieved," he said. "We looked like we would get nothing but one final heroic effort saved us. We had targeted four points from these opening rounds but we will settle for three and we are still hoping to take our place in the finals," he added.

In a tense first period, possession and territory was equally shared in a fierce but refreshingly open clash; the difference being that the Cedars took their chances on offer. In the 13th minute, centre Daniel Chiha collected his own chip over with aplomb, the bounce beating David Dodd, to cross out wide; Chris Salem missing the conversion. With the visitors’ confidence increasing, they extended their lead just after the half hour with an excellent, flowing move from half way. The ball passed through numerous hands as the home defence was stretched, John Koborsi taking a clever inside ball to split the drifting cover to score near enough to the posts for Salem to make it 10-0.

Whatever Kelly said at half time to rally his troops, it worked as they crossed for two tries in six minutes straight after the interval. Ireland’s best, full back Scott Grix linked well to find the line, Chris Bridge converting and three minutes later Ryan Tandy bustled over, Bridge’s conversion giving the men from the Emerald Isle the lead. With outstanding prop Charles Farah driving the Lebanaese forward, they forced themselves back into the contest somewhat against the run of play, Salem intercepting near his own line and racing 80 metres for a sensational score converted by Samer El Masri.

He kicked a penalty soon after on the hour to give the visitors a six point lead but with time running out, Littler rescued the Irish hopes when he launched his 6’3” frame for glory and Bridge landed the equalizing conversion.

Lebanon official George Elias was thrilled by his side’s exploits, “It was very, very tough but extremely exciting” he commented. “It’s a great result for us in a game that could have gone either way but the passion of the Lebanese pulled us through despite having such a young squad.” 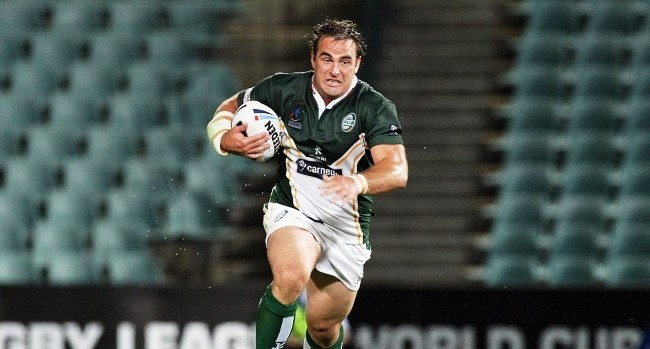