Lebanon's 2008 World Cup qualifying campaign eventually got under way in north London on Saturday after kick off was put back an hour. This initial delay, though, seemed not to have affected the Lebanese team, which leapt straight onto the attack against a massive Russian side. After just 9 minutes, strong running Wests centre Frank Samia went in from fifteen metres out, with fullback Samer El Masri converting with a well taken kick eight metres in from touch.

After this promising start, things momentarily ground to a halt, with Russia putting in a dogged and hard fighting performance that wrested control from the Cedars and soon had them under pressure. Lebanon were repeatedly penalised for holding down at the play-the-ball, surrendering field position and preventing any real fluidity for the 'home' side. Tough defending saw the Cedar line hold firm, and when coach Darren Maroon introduced rangy forward Khaled Dhib off the bench Lebanon was able to regain its momentum. The inspired substitution garnered immediate results, with Dhib slicing through the Russian line to score under the posts. El Masri's kick made it 12-0 to Lebanon.

Rather than wilt, the big Russian forwards rose to the challenge and were able to contain a Lebanese forward pack that lacked any particular menace. Maroon, looking once more to galvanise Lebanon's stuttering go-forward, judiciously introduced Balamand duo Amin Maassaraani and Allen Soultan, both to good effect, although two minutes before half time Soultan was sin-binned for holding down, the referee's patience having at last worn through after repeated warnings.

Both sides notched scores in a tumultuous period at the end of the first half. Lebanon's classy backs finally made a breakthrough after repeatedly threatening, with South Sydney wing Adham El Zbaidieh going in at the corner, unconverted by El Masri this time, to see them leading comfortably at 16-0. The combative Russians responded once again, however, keeping up the pressure through the middle of the park and scoring from a well executed kick to the right flank, which was taken with a sensational leap above the Lebanon defence in the in-goal. The half ended 16-4 after Lebanon narrowly missed scoring a fourth try on the hooter, the ball just failing to cross the line after a penalty kick was declined in favour of a set play.

The start of the second half, which had been so disastrous for Russia against Ireland last week, saw the Bears putting more sustained pressure on Lebanon whose line was pounded mercilessly. More courageous defence kept the Russian menace at bay, but the Cedars' second sin-binning - centre Danny Chiha on 66 minutes for holding down - reflected just how much pressure the Cedars were being subjected to.

A string of unlucky bounces on kicks and forward passes all too often ended Lebanon's disjointed attacking opportunities, most noticeable of all a dazzling run from hooker George Ndaira, before a trademark Lebanon back line move saw crack three-quarter Samia break through and feed El Zbaidieh who cantered in under the posts. Such dazzling succsses were few and far between, however, and the Russians ended on a high, forcing the ball over the line around fifteen metres to the left of the posts. Another failed kick brought the match to a close, 22-8 to Lebanon, whose unbeaten run extends to nine matches.

Lebanon's road to the 2008 World Cup has started with a crucial victory, but they lag some way behind group leader Ireland on points difference - while that proud unbeaten streak will be sorely tested next Sunday in Dublin. 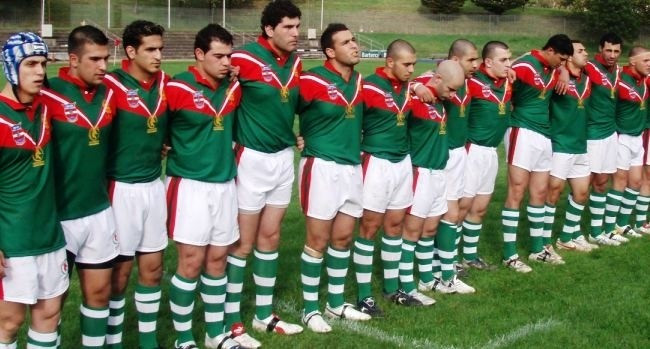