Wales let slip a 14-6 lead as Scotland ran in three second-half tries to win the World Cup qualifier in Bridgend. Welsh hopes were hit before kick-off when Iestyn Harris withdrew following a flare-up of his knee injury. Richard Johnson, Adam Hughes and Lee Briers got Wales' tries, Wade Liddell, Danny Brough, Jamie Benn and Mick Nanyn striking for the victorious Scots. The return match is in Scotland in November 2007 with the overall winner earning a place at the 2008 World Cup. The runner-up will have another chance to qualify for the tournament through the repechage.

Scotland coach Steve McCormack was delighted at the win in front of a crowd of 2,378 at the Brewery Field. "We addressed a few discipline issues at half-time and came out well," he said. "It was a fantastic second-half performance and being away in Wales against the team Wales have got, it was an excellent performance from everyone concerned."

Wales coach Martin Hall insisted that the loss of Harris made no difference to the result. "It was disappointing not to have Iestyn but it didn't have any bearing on the game," he said. "If we don't take opportunities, no matter what level but especially at international, and you don't score the points, it'll come back and bite you. Fair play to Scotland, all the opportunities they had, they scored and we didn't convert our pressure into points. But it's only half-time. We've got the second leg - another 80 minutes to come and it's all to play for." 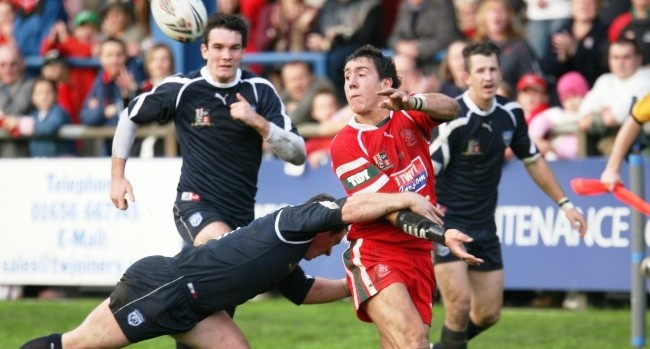