For the first time in their history, the United States will contest the Rugby League World Cup after the Tomahawks defeated Jamaica 40-4 in the 2013 Atlantic Zone Qualifier in Camden, Philadelphia. They now join Wales and the Cook Islands in Group D of the main tournament to be held in England and Wales.

Skipper, Jacksonville’s Apple Pope, said, “It is fantastic to achieve the opportunity to represent USA rugby league in the world cup. Jamaica deserve enormous credit but a massive thank you has to be paid to our coach Matty Elliott who instilled an ethic around working hard for success which all the boys committed themselves to and it paid off.”

Pope’s men put up a terrific second half performance to deny the rugby reggae boys, posting 36 unanswered points and spark wild celebrations in the New Jersey suburb. The hosts included Castleford utility Ryan McGoldrick in their line up after he served a ban and there was nothing to choose between the sides or indication of what was to follow in an absorbing first forty minutes.

The game was scoreless for just over the opening quarter, Sheffield’s Corey Hanson giving the Jamaicans the lead for the sole time in the 26thminute when he crossed on the blind side, Jymel Coleman missing the conversion. The USA hit back four minutes before the break, substitute Stephen Howard crashing on to a fine short ball from stand off David Miles, Joseph Paulo goaling to make it 6-4 at half time.

Scrum half David Marando’s try five minutes into the second period edged the hosts a converted score ahead, centre Mitchell Stevens extending the lead soon after to give the Tomahawks breathing space. Although he missed both conversions, two penalties in as many minutes from Joseph Paulo around the hour mark made it 18-4 and sapped the Jamaican resistance.

USA finished strongly, Mark Cantoni crossing to effectively seal the win and they added three further touchdowns in the final seven minutes through Miles, Danny Howard and prop Mark Offerdahl with their seventh four-pointer, Paulo adding the extras to two of them.

“Playing for a spot in the World Cup was a huge motivator,” said Offerdahl. “We concentrated on what we could do best and it paid off. We were confident that if we put everything together – and we did - we would win.” 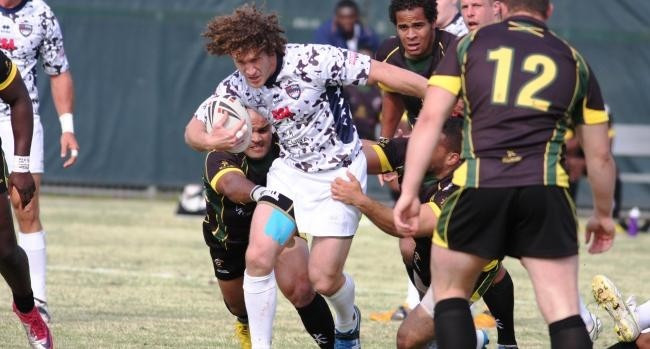