Germany came from behind to beat the Czech Republic on Saturday Evening, in the European Shield game in Prague. After a strong start, the Czechs led 16-8 shortly before half time, with Antonin Brabec and Tomas Holovsky both impressing. Germany put on a scrappy show in the warm evening sunshine for the first 30 minutes but then started to find some form both in defence and attack

The Germans, led by lock Dan Stocks and young prop Benedikt Rehm were hitting hard in defence and forcing the Czechs into mistakes, but they were also starting to open up the Czech defence late in the first half and it came as no surprise to see them grab a late try to go in 16-18 up at halftime.

Seasoned by their recent 38-6 loss to Serbia, the Germans took charge after half time with Benedikt Rehm, Janus Kruse, Dominik Bastian, Danny Stocks and the Keinhorst Brothers all causing many problems. Some strong defence, meant that the Czechs struggled to match the Germans for much of the second half. With Germany having alot more possession than in the first half it was inevitable they would pull away from the Czechs who never gave in despite losing a couple of key players a day before the game.

The game saw Dan Stocks finish with a great hatrick of tries and also saw Jim Keinhorst become Germany's youngest ever international at 17 years old. Germany also had the 4 Keinhorst Brothers playing. This is the first time that 4 brothers have played at International level at the same time in the same game.

In the final game of this tri-nation competition, the Czech Republic face Serbia in Belgrade on 18th August, with the Serbs only needing to avoid a heavy defeat to win the championship in its inaugural year.

Leo Berngruber, Germany captain: "At the beginning, it was pretty even, a bit scrappy. I think defensively, we put a bit more pressure on and started to get the upper hand, and I think that last try before half time was a real killer, and made it really difficult for the opposition. We came out in the second half and the Czechs were trying really hard again. There was a great run again by Danny Stocks, he scored again, and then it was difficult for the Czechs to come back."

Simon Cooper, President, Rugby League Deutschland: "I think the game against Serbia toughened us up -- we learned a lot from that game. We had six guys playing league for the first time in that game. From them, we had Benedikt Rehm making good metres today, we had Dominik Bastian at full back doing really well, and Janis Kruse, again, making good metres. These guys, they're mainly rugby union guys or handball players and they've learned so much from the Serbia game. And probably just that bit more experience in that short space of time probably helped over all."

Milan Mrtynek, General Secretary, Czech Association of Rugby League:"It was a good day out and, fair play to the Germans, they were the better team. We made far too many mistakes. The first few minutes of the second half cost us dearly. We conceded three tries in seven or eight minutes and that was it. On the positive side, we blooded Jakub Hrbac, the first young player from our Beroun development academy, and he played almost the whole game - that's a big encouragement for the future." 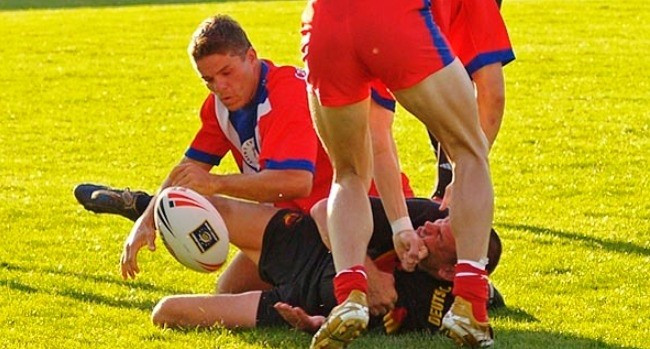