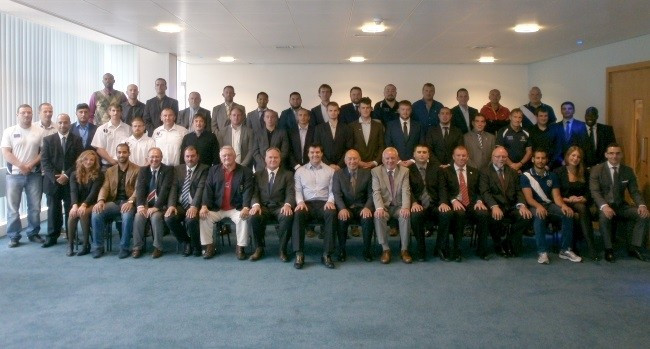 “The Council meeting was certainly the most energetic yet,” said Maurice Watkins, RLEF chairman. “The membership is increasingly involved and contributing in a very practical way to the direction in which the RLEF travels.

“Participation is up virtually across the board – in the case of Wales, Jamaica, Serbia and Ukraine quite dramatically – while improved governance practices have led to a more confident, self-sufficient membership corps.”

Delegates were brought up to date on progress of the current seven year strategy plan, at its half-way point and due to run until 2017, which included:
- Eighteen countries now have domestic championships compared with 12 four years ago
- Eleven nations have government recognition, compared with seven in 2010
- There are eleven Full Members compared with five in 2010; eight Affiliates compared with five and 12 Observers compared with eight
- Prior to 2010, the RLEF had not raised any external funding. This compares with €525.000 accrued from 2010-13
- 16 coach and 14 match official tutors have been trained and qualified by the RLEF and are currently delivering Level 1 courses throughout the Federation

In other news, the results of the 2014 Member Director elections saw incumbents Nebojsa Sretenovic (Serbia) and Graeme Thompson (Scotland) re-elected for a third term. The membership voted to rename the annual meeting the RLEF “Congress” and chose to rotate it around Europe, with members invited to bid for hosting rights on an annual basis.

Delegates involved in the EU-backed Leadership Devolution Project also attended workshops to discuss the results of their cluster governance workshops and review plans to improve governance and attain government recognition in their own countries, if they do not already have it.