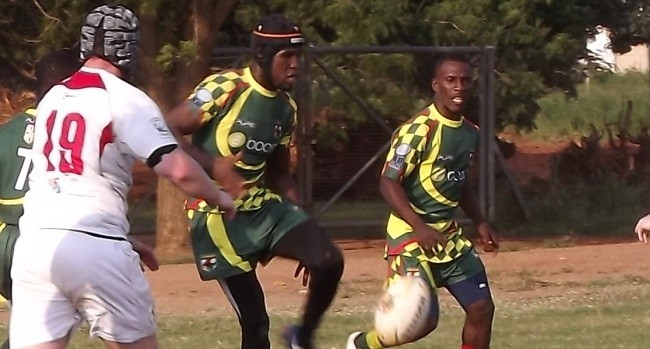 Following the return of the GB Student Pioneers after their two week, three match tour of Ghana, GRL Development Officer Sylvester Wellington feels that there is a genuine impetus for the sport to kick on there.

“We are now looking at building a strong foundation in rugby league within secondary schools which will progress to university and, later, sustain the community  league system,” he said from Accra. “The tour was extremely important, to measure where we are, to see a vision of where we aim to be and to give the players an idea of what it will take to be successful in a sport they have certainly embraced.”

Wellington continued, “It was not only the matches, where we were able to show everyone here a national side that they could be proud of, but we are extremely grateful to the Pioneers for the coaching sessions they held with youngsters who were captivated by what they were shown – and had a genuine enthusiasm for it – and also the donations of kits and resources. We are extremely grateful.”

Co-manager of the Pioneers, Keith Sandhu, saw the progress the hosts made as the tour progressed. “It was great to see how much the Ghanaians have improved and developed,” he noted. “The hard work and dedication from all the players and staff has been truly amazing, some players travelled for nearly two hours just to train and play. The games were all extremely tough and the Ghanaians loved the contact, our boys were shocked with the physicality of the matches.

“The work being done in the schools is great. One session we managed to coach and introduce the game to 180 kids, in another there were 70. With some more financial investment from sponsors and development work at grassroots level, I believe that Ghana RL will be a strong and good for the sport.”

His fellow tour leader, Steve Curtis, endorsed the view. “The tour to Ghana was a great success, it highlighted the huge potential for rugby league there,” he commented. “It was a perfect mix of development, coaching and PR along with some amazing cultural experiences. The Ghanaians are so friendly, We have made some great friends, they love league and are keen to learn. A personal highlight for me was seeing first-hand the potential in the schools, they had so much fun, had all the core skills and the PE teachers were excited by the sessions and wanting to do more.”

In the final tour match, also at the Presec School Legon, the Pioneers followed up their First Test 46-4 win over Ghana with a 34-6 success. In the lead up, the Pioneers held more school sessions, a joint training and coaching exercise with the Ghana RL squad, visited the historic Cape Coast and rain forest in the National Park as well as undertook several press conferences for TV and Radio.

The day’s proceedings were kicked off by an inter-house school game with children from Our Lady of Mercy School, Accra and they and their head of PE were presented a playing kit by Richard Tate on behalf of Bradford Bulls Foundation. In a closely fought contest with plenty of tries and great passing from both sides, the game was enjoyed by all the players especially those sporting their new playing shirts.

Despite the friendships formed between the Ghana and Pioneers squads, there was no love lost once the main game started, the noticeable difference in this encounter from the previous matches was the increase speed of the play the ball and defensive. Ghana also moved the ball with greater confidence and forced errors with their aggressive tackling.

Back to back tries from Sam Swire and Sam Roe broke the deadlock, skipper Jonny Morris adding a third by sidestepping his way round the home full back. Ghana’s defence came out tighter and faster after the break but Pioneers winger Jamie Park found space to race 40 metres for a try and a nice scrum play gave Morris space to glide through.

Determined running from man-of-the-match Jason Dzata lifted the home side and fast hands found a flying Gideon Khusey who made sure of the finish, Laboron Ibrahim with an  impressive touch line conversion. Where the first game offered a glimpse of the passion and pride of the West African nation, the second proved there is a real desire to learn and improve in front of another young and enthusiastic crowd.