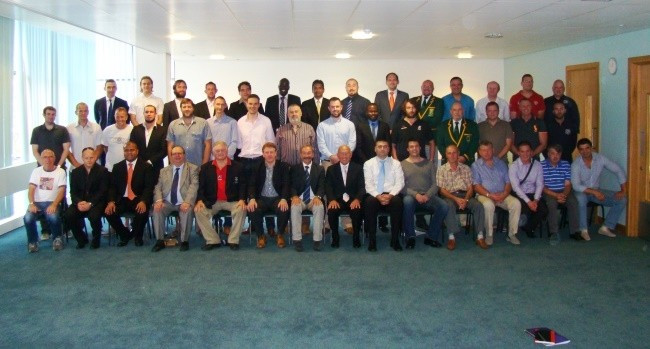 It signalled a first full year as chair for Maurice Watkins CBE. “Some notable progress has been made by many of our members in line with RLEF strategy and there is real unity of purpose throughout the countries to strengthen their on and off-field operations,” he said. “The high proportion of members in attendance and the distances travelled by some points to an extremely committed and serious group.”

The delegates then participated in a lively debate led by RLEF and RLIF board member Graeme Thompson covering proposed re-structuring of the 2014-21 RLEF international calendar, which could see the European Cup, Shield and Bowl replaced by an integrated European Championship from next year. The planned name change is designed to enable members to better engage with local stakeholders, especially in government, who are familiar with dealing with such a system. The draft eight-year calendar is now set for a month’s consultation period to allow the members time to study the mechanics of a system that would introduce promotion and relegation between the tiers.

“The conference actually exceeded our expectations and I am still processing all the ideas, data and information,” commented Danmark Rugby League Forbund president Steve Davy. “It offered an extremely valuable chance to learn from fellow delegates.  It was a unique opportunity to share ideas with countries that are new to rugby league,” he added.

Belgian rugby league president Yves Kazadi, like Davy attending his first meeting, was also encouraged: "It is awesome how this type of meeting can offer a boost in our managerial approach for the next season. I made a lot of contacts and the several projects presented show how fast our RLEF is growing. I went back to Belgium with a bigger appetite and a stronger motivation to increase the number of affiliates and activities for the Belgium."