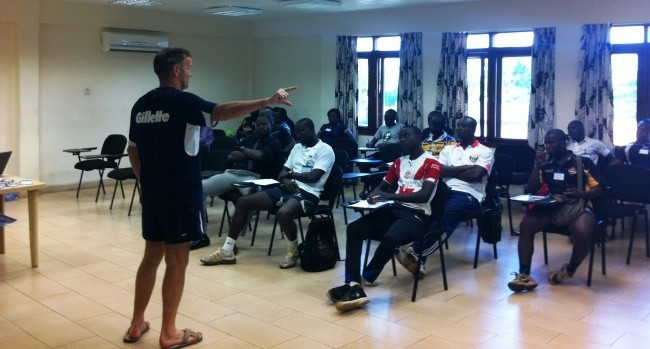 Ghana Rugby League Development Manager Sylvester Wellington has overseen the completion of a training course for potential rugby league leaders, held at the University of Ghana in Legon, Accra. It was delivered by a three-man RLEF technical delegation, Coaching Manager Martin Crick, Andy Gilvary and Danny McNeice, over six days.

“I was very happy to see lots of men and women turn up for the course,” said Wellington. “They have really shown lots of interest in the game and they can’t wait to impact on their people when they get back to their various institutions.”

A total of 63 candidates drawn from civil society, schools and universities, national defence establishments and from Nigeria attended a one-day introductory course in coaching and match officiating and then 28 of those completing the two-day RLEF Level 1 Coaching Course.

Stephen Larweteh, from Vilac International School, was one who completed all aspects. “I have enjoyed basketball all my life until the GRL development manager met me and said to me to get involved. Initially I was reluctant but what I have learned from the classroom to the field has been very good. We will go out there to spread the good news of rugby league.”

The course was officially sanctioned by the Ghana Education Service, part of the Ministry of Education, which sent the highest proportion of candidates from Accra’s many state and private schools. Labone Senior High School teacher Vida Nyawornota also sees a bright future for the sport in Ghana: “By the end of the course I joined the men to play contact rugby league for the first time; I enjoyed it so much and am ready to encourage women and men to take this game on. I believe it teaches you a lot both physically and mentally.”

Crick was keen to point out the potential in Ghana: “The improvement was massive and, by the end, after just a few days of exposure to the sport, we saw what looked like a game of rugby league played by some athletic people. In terms of potential, Ghana easily matches and possibly exceeds what I’ve seen in many of the European countries I’ve worked in.”

The Ghana rugby league project is a pilot scheme in sub-Saharan Africa, with a number of other countries interested in adopting the sport since its recognition by the Commonwealth Games Federation in 2011.