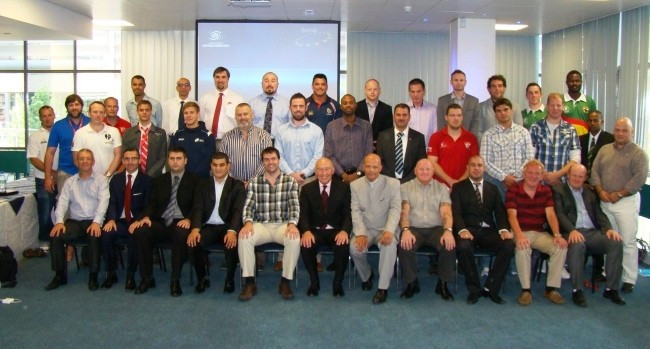 The tenth RLEF Annual Council Meeting was held in London over the weekend, with 20 nations in attendance. The Federation Marocaine de Rugby League was accepted as an Observer, the members returned directors Graeme Thompson and Nebojsa Sretenovic, representing Scotland and Serbia respectively, for a further two years on the Board, and Brian Simpson MEP became the RLEF’s first official ambassador.

Maurice Watkins CBE chaired the meeting at Brunel University in west London: “My first RLEF Council Meeting underlined what my short time with the federation had already suggested: that rugby league in Europe and its affiliated territories is certainly making progress under the leadership of some extremely motivated and talented officials.

“We had a number of new nations attending their first Council meeting while all but two of our 15 members were represented, showing an active and involved core. I would like to congratulate especially all those involved with the Federation Marocaine de Rugby League for their comprehensive Observer application, and Brian Simpson MEP for his recognition by the federation’s members. I look forward to working with them.”

Poland, Greece and Ghana were represented for the first time, with all three taking full advantage of the chance to interact with the other delegates as they set out on the path to develop rugby league nationally.

“It was a great experience to attend the RLEF 's AGM,” said Tasos Pantazidis, chairman of the committee for the establishment of a Hellenic Rugby League Federation. “A very well organised exchange of ideas and knowledge. All this will be very helpful in order to organise in a better way our development."

Another first was the recognition of a Moroccan governing body. Despite rugby league’s decades-long association with the North African country there has never been an associated governing body in Morocco. The kingdom’s government recently changed its sports laws and the FMRL, supported by the French Federation, the RLEF and Brian Simpson, who is interceding personally with sports minister Ouzzine, will now seek an independently recognised federation.

Wiganer Brian Simpson, Brussels’ transport commissioner, has been an active supporter of the sport’s growth in Europe and was unanimously voted by the members as official RLEF ambassador, with a mandate to promote rugby league national governing bodies within the corridors of their governments.

The formal Council meeting was followed by the RLEF conference, now in its third year. Commonwealth expansion in a West African context, the continuing progression of the RLEF’s Technical Strategy and social media planning were topics covered by the guest speakers.