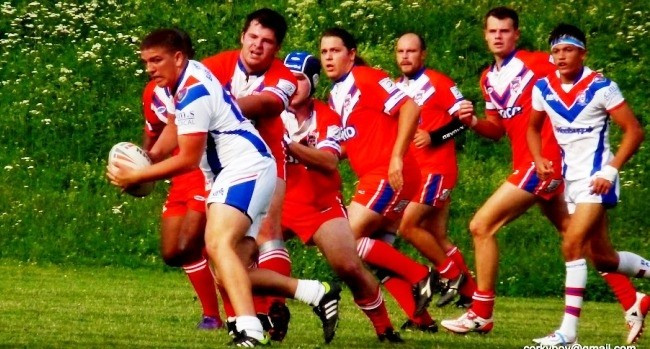 The Czech Republic have named a 25-man squad in preparation for their European Bowl match with Hungary in Vrchlabi, 14.7.12. The squad has members from 8 of the 9 domestic clubs, and will be cut to 17 for the European Bowl game.

The Czech Republic defeated a Hungary Select team last year, 38-16, in Keskemet, but are looking forward to this year playing a full Hungarian national team which satisfies the IRLF national team qualification requirements.

Czech national team coach, Andrew Mulhall, admitted that the Selection Board legitimately struggled this year with nominating a national team squad, because of the amount of worthy players that could not be fitted in. “The simple fact was that several players who have served us well in the past could simply not be fitted in this year due our expanded player base and the impressive way in which some of the new players have chosen to approach the way they go about participating in domestic rugby league within the Czech Republic. We have also lost several players due to injury, and others because the timing of the match in the thick of summer means they have not been able to commit themselves to playing. The recent BARLA matches too, despite some big scores against our Youth and Uni team’s, have allowed us to get a good look at our players against far more experienced opposition, and to see how they reacted to that. Those matches, in conjunction with the CZRLA 9s in Pardubice in which a BARLA team also dominated, have been pivotal to the selection of this squad.”

Czech national team captain, Petr Sedina, believes that this is a pivotal point in Czech Rugby League development. “This squad has been picked purely on form, with only players committed to improving the standard of Czech Rugby League both domestically and internationally selected. I know that there will be disappointed players who have not been selected, but if they put in the hard work and commitment, there is no reason they won’t be putting their names forward for national team selection in the future and pressuring the guys selected in this squad. It is all about commitment and pride in representing your country!”

Pictured: the Czech Students match versus BARLA was used as a selection trial for some hopeful Czech players.