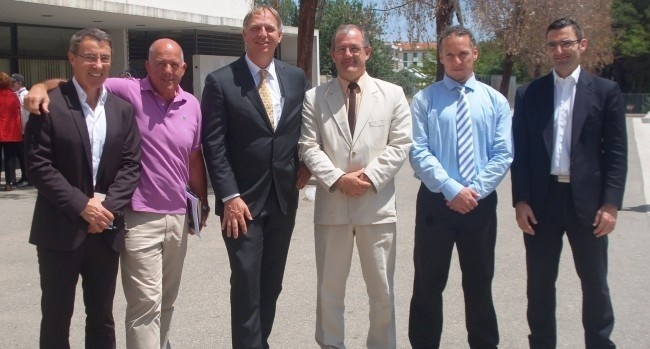 A Nederlandse Rugby League Bond delegation attended the French Federation’s AGM on Saturday as part of the RLEF’s Governance Foundation Project. The project is in partnership with the European Commission and is designed to improve governance in European rugby league through a series of mentor-learner exchanges and institutional level links.

One of five such partnerships sees the French act as Dutch rugby league’s mentor, a relationship that commenced with NRLB chairman Jason Bruygoms and director Timo Meinders’ visit to Salon de Provence, 50km north of Marseille, to the 69th FFRXIII congress. The Dutch will host a French delegation in 2013 for their AGM, with an accompanying assessment of the NRLB’s governance practices to follow.

“On behalf of the NRLB I would like to thank the RLEF and the FFRXIII for making this weekend and opportunity possible,” said Bruygoms. “A lot was learnt on how a successful federation can be run with the correct governance and we shall be applying what we have seen and learnt here in the Netherlands with the perspective of further growth. We are proud to have a ‘big brother’ in this project like France."

The Dutch attended the formal AGM in the morning, then observed two of the Federation’s commissions in action - the Federale, or amateur leagues, strategy meeting and then the youth commission - before holding talks with FFRXIII technical director Patrick Pedrazzani, head of match officials Francis Desplas, RLIF Development Manager Tas Baitieri and RLEF General Manager Danny Kazandjian.