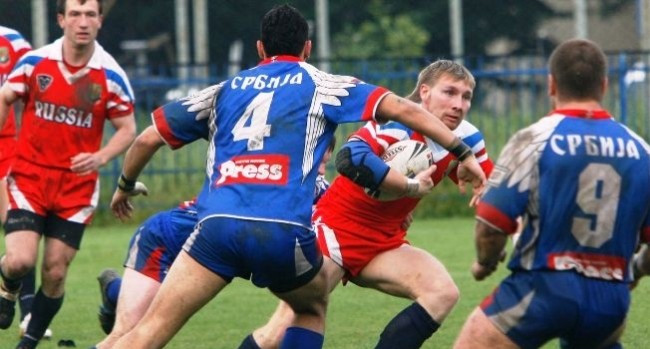 Serbia and Russia are the first sides in to battle in this Saturday’s Belgrade double-header, which will mark the culmination of the 2013 Rugby League World Cup European Zone Qualifiers.

Although they are out of the running for qualification, having lost to Lebanon and Italy, they have their own score to settle with the Milan Kosanovic Cup up for grabs after they both defeated Ukraine –and world rankings positions also being at stake. Serbia’s preparations ended with two-day camp at the five-star Football Association of Serbia Sports Center in Stara Pazova outside Belgrade.

Captain Dalibor VukanoviÄ‡ is back in team after missing the Italy game due to hamstring injury, Milan Šušnjara is again in 20-man squad and Stevan StevanoviÄ‡ appears for the first time in the qualifiers; Slaviša ZekiÄ‡ and Vladan KikanoviÄ‡  dropping out.

There is added spice in that three Serbian players, Dalibor VukanoviÄ‡, Soni RadovanoviÄ‡ and Zoran PešiÄ‡, spent several months in 2006 and 2007 at RC Vereya, the club with the most representatives in Russian side and their current champions. Dynamic hooker PešiÄ‡ – a scorer against Italy - is expected to raise his record of 24 consecutive appearances in the national team line up. There are no uncapped players in the host’s 20-man squad.

Serbia have lost both their previous encounters against Russia; in a 2006 RLWC qualifier, 6-44 in Belgrade and in the 2008 Euro-Med Challenge 4-30 in Novi Sad. The two nations have never played in Russia

Serbia Technical Advisor Lee Crooks commented, “ I think that both teams will have earmarked this weekend’s game as a winnable one. We have developed as a team over the last two weeks and we go into the match with a lot of confidence.”

“The score line against Lebanon did not paint a true picture but we overcame that disappointment and produced a very good performance against the Italians. We worked extremely hard defensively and challenged them on offence on occasions but need to execute better and come up with better attacking decisions. We are all really looking forward to the challenge and if we play to our potential I am sure we can get a positive result," he added.

Pictured: Serbia and Russia face off in 2008 World Cup Qualifying