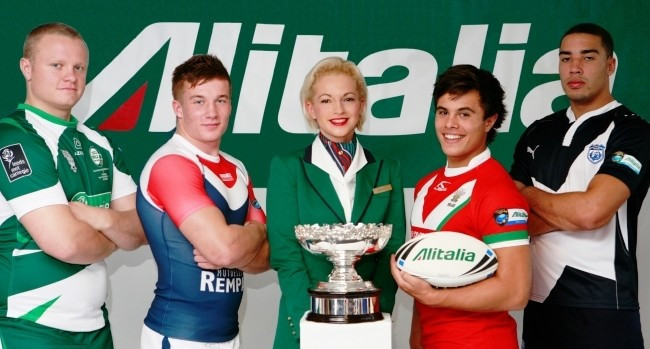 Following the success of their sponsorship of the 2010 Rugby League European Cup, which saw Wales narrowly triumph and secure qualification for this autumn’s Gillette Four Nations tournament as a result, Italian national airline Alitalia has extended its deal to secure the naming rights for the 2012 competition.

Rugby League European Federation chairman Richard Lewis commented: “I am extremely pleased that Alitalia have extended their partnership of the Rugby League European Cup for the 2012 tournament. They are an integral partner to the sport with a major role to play in the development of rugby league across Europe. Alitalia has a huge passion for the sport and that forms the basis of a lasting and successful partnership between us.”

The European Cup is now contested biennially as part of the RLEF's new international competition structure and Alitalia have doubled their input reflecting its increasing brand worth. The 2010 encounters were  broadcast by three television networks and culminated in a thrilling denouement in Albi when hosts France lost by a point to Wales in front of the French Minister of Youth and Sport.

Alitalia vice-president of Europe Middle East and Africa, Antonio Temporini said, “Alitalia is proud to once again partner with the Rugby League European Federation for the 2012 European Cup. The RLEF is an organization which shares our common strong sense of team spirit and aspiration to acheive excellence."

The four 2012 Alitalia European Cup entrants will be decided following the completion of the forthcoming Gillette Four Nations encounters, in November.