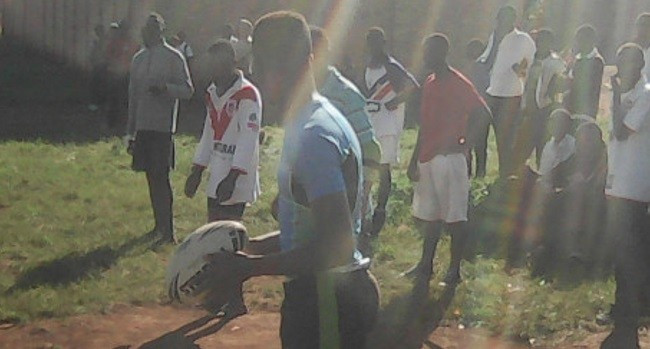 Despite a lack of equipment and resources, and largely isolated from fellow rugby league organisations, the Burundi Rugby League continues to push the sport’s profile in east Africa’s Great Lakes region. Led by president and founder Jean Du Christ Rusiga, BRL has played a series of development games around the capital city, Bujumbura.

It has been supplied with rugby balls by the RLEF and RLIF which have been strategically deployed to support the youth teams playing in the Muha and Ntahangwa districts of Bujumbura. But more basic equipment is needed to allow BRL’s ambitious and industrious leaders to grow the game more systematically, something Middle East Africa Director Remond Safi is acutely aware of – not only in Burundi but in his growing geographical area of responsibility.

“The search for grants globally for Burundi is ongoing, as is seeking sponsors for them,” explained Safi. “We have worked with a sports consultancy and just two weeks ago sent them leads to submit more applications on behalf of all the African nations. While we have been successful in obtaining grants for other nations in the MEA, so far we have been unsuccessful with Burundi which is really frustrating. I'm confident we will find commercial partners to support their activities but it is a difficult, competitive environment.”

The indefatigable Rusiga, who created Burundi Rugby League in 2015, has been proactive despite the setbacks and is not deterred him from his mission.

“As leaders of the game we will always try to find a way to succeed and will stay true to the task we have set ourselves,” said Rusiga. “But more than just succeed for the game’s sake we see the rugby league project as a way to look after the welfare of our players through creating a solid infrastructure and protection of their human rights. The sport must continue to seek extra investment to support infrastructure projects and sustainability. This is our dream in Burundi and we will continue to pursue it.”

With its closest official rugby league neighbour, Ethiopia, over 2,000 km away and similarly challenged, Burundi has had to look closer to home for the stimulus that representative football provides. However, a planned game against another aspiring league nation, the Democratic Republic of Congo, which is yet to affiliate to the RLIF, was shelved due to a lack of funding.