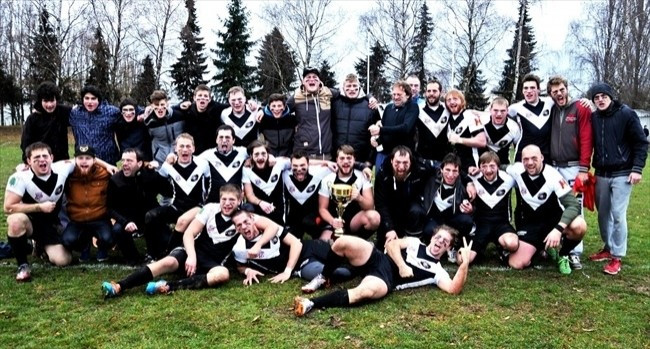 Seven sides in the First Division played each other home and away, Havlickuv Brod only losing twice in a memorable year. Victorious captain Vladimir Mach said: “The win and the manner of it capped a memorable season for us and the sport here. We knew the Rabbitohs had injury problems – and full credit to them for sticking at it – but we wanted to put on a show.”

Their performance was even more impressive given the wintery showers that drenched the 400 fans watching. Man of the match and Milan Mrtynek Medal winner was Orli prop Michal Pecha who opened the scoring and crossed for two of their ten tries.

Rabbitohs captain, prop Darek Blatek was understandably downbeat as his side lost the Grand Final for a second season running. “It is hard to take a beating like that after such a successful year for us,” he noted. “We will regroup over the winter break and come back stronger next year.”

Rabbitohs second rower Mirek Pavlik was given their man of the match award at the post final dinner.

Slavia and Czech national team coach Ladislav Cintler commented: “To have a 100% record in the autumn is a fantastic achievement for our team and we look forward to building on this finish in 2016.”Pre-season favourites RLC Krupka Dragons ended a disappointing fifth after an injury strewn season which robbed them of many key players for large parts of 2015.

A highlight for the Dragons was the opening of their new ground which is the third dedicated rugby league venue in the country alongside Vrchlabi and Tis.Vrchlabi Mad Squirrels and 2014 double winners Lokomotiva Beroun finished sixth and seventh respectively after massive player turnover.

Both clubs prioritised junior development in 2015 with a number already having made their first team debuts allowing both to plan optimistically for 2016.