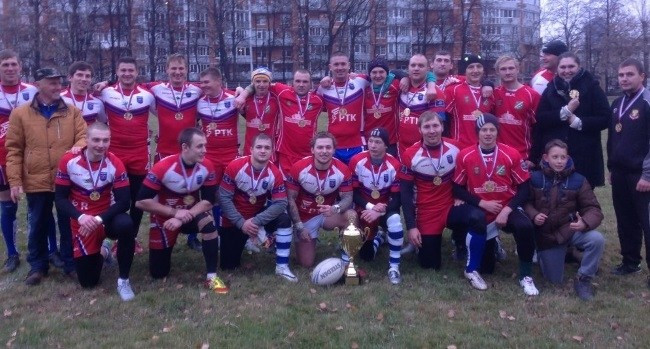 As Russian rugby league prepares for next autumn’s World Cup Qualifiers – Europe, the stronghold village of Vereya, 80km to the south of Moscow, is once again celebrating silverware, after their Bears RLFC heroically defeated resurrected Moscow Magicians, 28-24, in the final of the Russian championship. It saw them pick up the trophy they last held in 2013. The thrilling decider, level 6-6 at half time and which saw the Bears overturn an 18-6 deficit, was decided by international centre Petr Botnarash’s brace of tries and completed the most extensive Russian championship in recent years, extending the air of enthusiasm that surrounds the sport in the country at present.

Four conferences competed in the 2015 championship; in Crimea, where the Institute for Nuclear Physics team -nicknamed ‘the Flying Dutchmen’- qualified for the conference play-offs; the North-East, where a four-team competition centred around the city of Perm, which joined ARLK in 2014; the six-team South, around Rostov-on-Don; and the powerful Centre for Moscow and Moscow oblast (the province surrounding the capital city), which saw eight teams compete – double the number in the championship last year.

The Magicians, a celebrated name from Russian rugby league’s past, reformed at the beginning of the season to join capital city clubs Storm and Lokomotiv as competitors to Vereya’s near total dominance. Only five points separated the top three, while fourth-placed Moscow Red Arrows lost four of its six games against the big three by just one score, demonstrating a new-found competitiveness.

Vereya, as table toppers, qualified for the final round of the play-offs automatically, Magicians joining North-East Conference winners Vitez RLFC and Express RLFC from Southern Conference in the first round. “Magi” defeated Express 50-34 in Rostov, while Vitez brought the Crimean Physicians down to earth. The two victors then joined Vereya in a three-way semi-final play-off, with the mini-league deciding the two finalists. Vitayz dropped the crucial match 40-28 to the Muscovites, who themselves narrowly lost the final dress rehearsal against Vereya 18-14 at home.