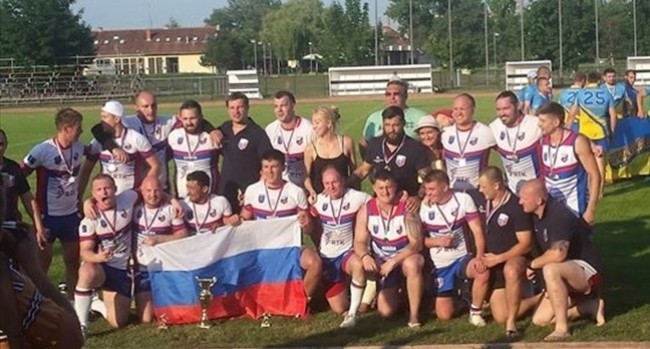 Fresh from their victory over Ukraine in Belgrade, which saw them make the 2016 European Qualifiers for the 2107 World Cup, Russia won a Euro 9s tournament in the city.

Six nations participated divided in the two groups, with winners of each playing in the final for the trophy. Serbia won Group A beating Hungary 36-0 and Czech Republic 14-8, the Czechs taking second place after defeating the Hungarians 24-4.

In Group B, Russia repeated their win over Ukraine at the modified version, this time 24-8, and defeated Bosnia Herzegovina 26-0. Ukraine edged second spot on point’s difference when they drew 10-all with Bosnia.

In the play off games, Bosnia took fifth spot with an 18-10 success over Hungary; Ukraine sealing third after seeing off the Czech Republic, 26-0.

In the decider, a good crowed at the Makiš stadium enjoyed an entertaining game, Russia beating hosts Serbia 26-12.

SRLF vice president, Nebojša Sretenovic, said “We are looking to extend the tournament to become one where all countries in Europe can take part. It was a great finish of a massive weekend for Serbian Rugby League, with SRLF also hosting its first Rugby League European Federation Congress.”