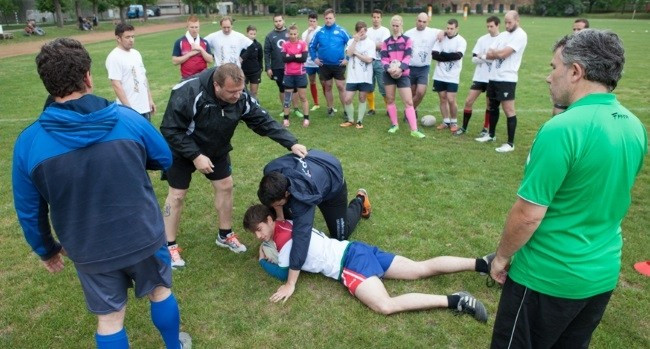 The final Hungarian activity of the Leadership Devolution Project - co-funded by the EU, the RLIF and RLEF - took place in Budapest, attended by Hungarian, Irish, Italian and Greek delegates.

Hungary RL Federation president, Zsolt Lukacs, declared it a great success. “We’ve received outstanding, high level information and a boost in motivation again,” he commented. “We feel like we are on the right track and can call a bigger number of players."

“The project is especially useful for the new rugby league nations and the additional knowledge is vital,” said Hellenic Federation of RL delegate Tasos Pantazidis, who will be involved in the final cluster activity, in Athens in June.

Federazione Italiana RL coach educator Tiziano Franchini, who led the activity, noted, “The Hungarians were very enthusiastic and the progress they made since their first involvement in Piacenza is impressive. All the emerging nations have a good attitude to develop and they are keen to progress their knowledge of the game with the proper tools.”

Former professional and Ireland international Des Foy agreed. “The Hungarian coaches showed that they have made progress with their understanding and delivery of the skills of the game, There is great potential to develop the sport in and around Budapest. We should encourage teams from more established rugby league areas to take sides there."

The European Union is contributing €195.000 to the biggest transfer of knowledge in European RL history. The programme commenced in January 2014 and ends in June.