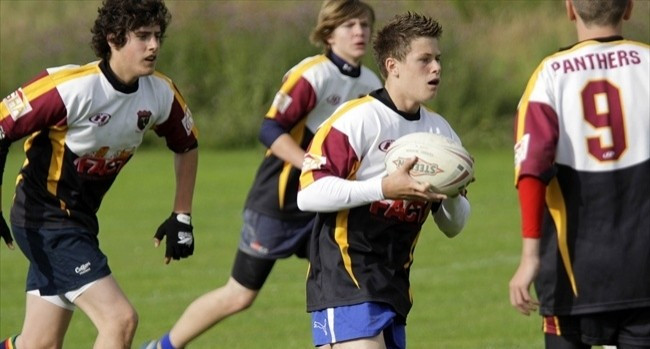 Seventeen-year-old David Scott has become the second Scottish based Rugby League youngster to sign for an Engage Super League club within the space of a month after he agreed terms with Hull Kingston Rovers last week.

Scott, who has represented Scotland at under-16 and under-18 levels in the past two seasons, is the second player to come off the production line at Scottish Rugby League club Easterhouse Panthers A.R.L.F.C and join the ranks of the Super League, after former team-mate Chad McGlame joined KR's fierce rivals Hull FC early in February.

Scott has joined the Hull KR Academy on a 12 month contract with the opportunity to earn himself a full-time contract should he impress the coaching staff. The man that helped nurture his talent, Easterhouse head coach Mark Senter, feels he has the ability to do just that.

"David is a really talented player and an incredibly focused individual," said Senter. "I first met him when he joined our club aged 12 and since then he's consistently been one of our top performers.

"He's had some outstanding games and it wouldn't surprise me if he was starting in Super League in the next few years."

The Eastershouse area of Glasgow is recognised as one of the most deprived estates in Europe, but with two players graduating through the Panthers system to earn professional contracts, Senter believes Rugby League is on the up.

"Obviously it's great for the sport in Scotland to have these two players sign professional contracts," said Senter. "As a coach, it's a catch 22 situation, I'm delighted for the two guys but I said to the other players that we'll have no team left by the end of the season if we keep having guys signed up by Super League clubs.

"But it's brilliant for us as well, we've had television crews coming into the club and we've got coverage in the national press which we've never had before and it's great to see the sport getting the recognition it deserves.

"On the back of Chad signing for Hull FC and now David joining Hull KR, we've seen a massive increase in the number of people getting interested in playing the game and our participation numbers are really growing. The success of these two players shows just what can be achieved in these areas and I hope that Rugby League will continue to grow all over Scotland."