England Lions under 18s ran out 42-24 winners against a Wales side who battled all the way.

However, the English side just had a bit too much rugby league knowledge for the Welsh and the scoreline isn’t quite reflective of how hard the Welsh team fought.

Wales took an early lead. Euan Morris scored out wide and Elliot Jenkins, who has also been named in the full Wales train-on side ahead of the World Cup, converted. However, England soon addressed the balance with a try from Will Tully converted by Cole Connolly before Eddie Wilcock went over from dummy half to give them a lead they wouldn’t give up. Connolly’s second goal made it 12-6.

Sean Collins went over in the corner for Wales’ second try which went unconverted before England score again through a Curtis Teare break finished off by Charlie Taylor with Connolly converting to make it 18-10. England extended their lead to 24-10 when Wilcock crossed for his second try which Connolly improved but Wales hadn’t given up as Morris scored his second of the day which went unconverted.

However England went into half-time with a strong 30-14 lead after Liam Kenyon set up Charlie Taylor to score under the sticks. Connolly kept up his 100% first half kicking record.

Wales started their comeback 15 minutes into the second half. Brett Thomas scored out wide but again, agonisingly for Wales, it went unconverted.

They closed the gap further through a Nye Walker try that Jenkins converted and despite it being five tries each, Wales were still six points down with just ten minutes to go.

England then pulled away with two tries in the closing stages to seal the win. Will Ashworth ran 70 metres to score under the sticks and from kick-off, Wilcock grabbed his hat-trick. Connolly converted both. 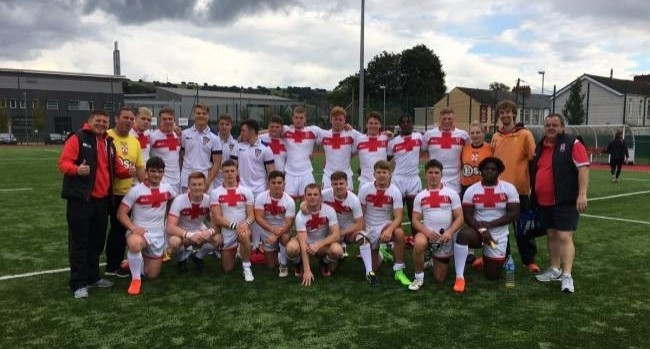