Wales have beaten England for the very first time in an under 16 Rugby League international after securing a hard-fought 18-10 win at Cardiff Met University on Saturday afternoon.

The list is a long one in the international game that is normally an annual event but was missed last year. Fourteen games played before this encounter and 14 England wins since the first game back in 2003 in Penarth when the score was 0-40. Wales have had some narrow defeats, like the time they lost on conversions in both 2011 and 2013, but this is the first time they've recorded a win against the Super League players of the future.

Saturday’s result is an even more outstanding one when you consider the clubs that the players come from. Fourteen of the 17 England players were affiliated with Super League clubs and the other three at RFL regional academy sides. In turn, Wales had ten players from South Wales based community clubs – four from Aber Valley Wolves, four from West Wales Raiders and two from Rhondda Outlaws.

And Wales didn’t scrape it either. They blew three chances in the first 15 minutes and could have been 18-0 up early on. Finally the deadlock was broken when Joel Davies crossed in the corner, James Machin unable to land the extras.

England hit back five minutes later through a Josh Gray try, scored following a scrum, that Lewis Dodd converted to give them a 6-4 lead at half-time.

Wales regained the advantage seven minutes into the second half through a Ewan Badham try that James Machin converted. However England were soon level when Nathan Carter scored in the corner after Wales were caught out following another scrum.

The winner came ten minutes from the end. Finn Swift crossed out wide and Lewis Hall converted well from the touchline, before extending the lead with a penalty soon after that to rubberstamp the victory.

Wales coach Jason Seddon said: “We thoroughly deserved this win over a good England side, the best academy players in England. We’ve put in a lot if hard work in the last few camps so to achieve what we’ve done today makes it all worthwhile.

“We always knew we had the quality of player in Wales, we just needed to get them the understanding of what was required. Now we need to kick on from here and establish solid under 18 and under 23 set ups so we can continue to produce quality players for the senior Wales side. It’s our job at under 16 level to continue to nurture and develop the talent we have in Wales and kick on.” 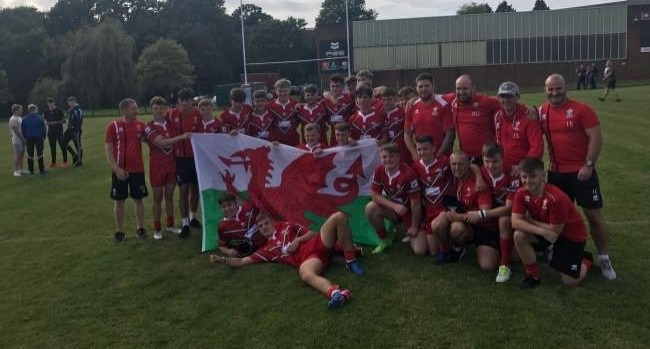