Scotland prepared for their clash with Australia next Friday by beating Barrow Raiders, masquerading as the Cumbria Select XIII, 48-16 at Barrow tonight. The Bravehearts, who left six of their star names in the Craven Park stands, scored nine tries against their third tier opponents and it was not until the latter stages that Steve McCormack's experimental side broke loose.

Skipper Danny Brough, and North Queensland Cowboy duo Lachlan Coote and Kane Linnett were rested, while Luke Douglas only landed in Glasgow from Sydney a few hours earlier and Euan Aitken had a tight hamstring.

There were less than three minutes on the clock when Leigh hooker Liam Hood broke the defensive line inside his own half and set the supporting Dave Scott clear to race over, the first time the Bravehearts had been in the Cumbrians’ half. Debutant Ryan Brierley added the extras.

Scotland stepped it up midway through the half, scoring three tries in five minutes. A Tierney step, inside ball to Ben Kavanagh who sent sub Callum Phillips – one of several Cumbrian based players in navy blue, over the line. Then debutant forward Frankie Mariano – an east Yorkshireman with family roots in Scotland and Cape Verde – scored a fine solo try on a diagonal run through traffic, which was followed, almost from the kick off by Scott’s second. The winger from Stirling seared away down the left after Ben Hellewell had taken advantage of a two-man overlap. Brierley only converted one of three attempts.

The Harrison Select XIII – basically the Barrow team that was one win from promotion from League One a couple of weeks ago – could have folded but instead fought back well and matched their illustrious opponents for a period either side of half-time. They got on the scoreboard when a long kick from halfback bounced straight through Matty Russell’s legs for Ryan Fieldhouse to pick up and score for the biggest cheer of the night so far. Chris Atkinson converted.

Scotland’s pace and strength gave them the upper hand in most encounters but decision-making was hit and miss and their handling not as sharp as it will need to be next week against the Kangaroos.

Six minutes before the break, Brierley latched onto Callum Phillips’ break to skip clear and score his first Scotland try. But the try of the half arguably came from the home side, Chris Fleming finishing a fine move from right to left that went through half the Barrow side as the Bravehearts’ defence scrambled ineffectively.

The Cumbrians started the second half strongly too. The moment of game for Harrison came after Russell had hauled down young left winger Shane Toal – one of two full Scotland internationalists in the Barrow side alongside veteran Oli Wilkes - as he looked like scoring only for Harrison to scoop up the loose ball and give it to Fleming to grab his second try of the game.

In a scrappy second half, a tired-looking Scotland rarely found cohesion and it was left to individual breakthroughs, St Helens-bound loose forward Adam Walker showing fine footwork to score a solo effort before the hour. The Bravehearts scored three late tries through debutant centre Tyler Cassel on the left and Wides forward Sam Brooks from a lovely Callum Phillips’ offload. Phillips then defused a high bomb and was clattered, causing a lengthy delay while he was treated for a head knock and was led off the field having put in a man of the match display.

Once the game restarted, there was just time for one more Scotland break, Tierney streaming away from halfway pursued by four supporting team-mates and half the Barrow team, the Wigan star’s pace proving far too much for anyone else at Craven Park. 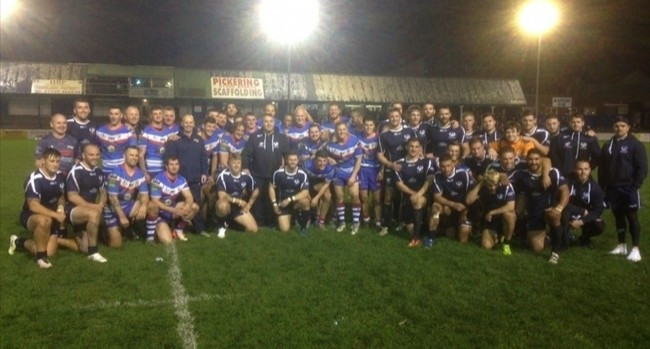