A fantastic performance from the English Lionhearts saw them come out on top against the Canadian Wolverines, but the scoreline does not do justice to the efforts of the home side. A double from Jordan Gibson and Danny Gee was accompanied by tries from Liam Quinn, Martin Lewis and Matty Norton with Gibson on good form with the boot as well.

The first half an hour of the game was a complete deadlock with the Canadians applying much of the pressure, but the Lionhearts defence held firm before Gibson opened the scoring.From there the English really got some momentum with Norton, Lewis and Gee all scoring before half time to give the scoreline a lopsided look.

The Lionhearts Gee, Quinn and Gibson all added scores within fifteen minutes of the restart to put the result beyond doubt. However, the Wolverines were tenacious and finally got a well-deserved score through Christian Miller with a strong finish and Steve Piacek kicking the conversion.  From there the English pressed for another score, perhaps too hard but the home team held firm to leave the final score at 38-6.

Lionhearts coach Mick Blakeley was pleased with the result saying, "The Canadians fought hard and really brought the game to us in the first half hour, but we were able to pull away once they began to tire and allowed us to move the ball out wide."

Fellow coach John Ellis added, "It has been a fantastic tour, and a great experience for both ourselves and the Canadians. It was good to see how they took to the game and the appetite they have to grow and with both the national team and the Wolfpack." 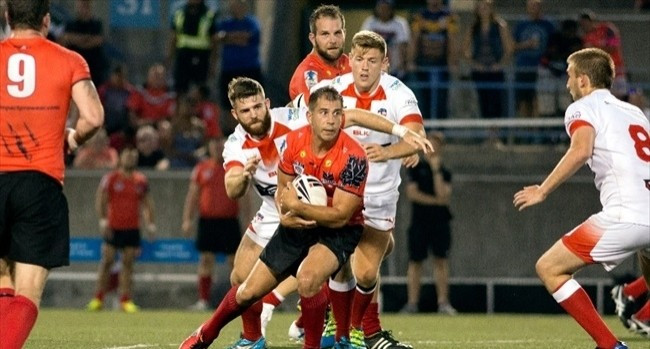