The North West English Lionhearts came away victorious by 38-6 in the first game of their two match tour to Canada, but were made to work hard by a committed Ontario State representative side.

A first half hat trick from Matthew Norton of Clock Face Miners was the difference in a close first period, before the Lionhearts found their form in a second half shortened due to rapidly deteriorating light at Burlington Centaurs Rugby Club.

Adam Prendergast of Widnes St Maries gave the English side a positive start when he scored under the sticks after 10 minutes. The State side were tough opposition and defended stoutly for 15 minutes before TJ Cole intercepted an Andrew Groves pass and smartly offloaded to Orlando Jones who scampered down the line 70 metres to score. The kick from Andrew Giguere then tied the scores up at 6-6.

This served to wake the touring side up, Matthew Norton in particular who managed to cross three times in the left hand corner to build up a lead of 12 points after three unsuccessful kicks.

The second half saw the Lionhearts put in a more convincing performance although the humidty, rain and declining light made it difficult for both sides to really display the best of their rugby. Scores from Martin Lewis (Leigh Miners Rangers), Rob Bailey (Hindley), Dave Astley (Orrell St James) and Liam Quinn (Thatto Heath Crusaders) were added to by two kicks from Jordan Gibson (Haydock) to round out the scoring before the referee sensibly called time early given the poor visibility.

Coach Mick Blakeley said of the game "Our lads played well considering the number of changes we made throughout the game, and we can take nothing away from the Canadians who gave a great account of themselves, played in the right spirit and took their chance well. Our little bit of experience though showed through in the second half." Joint Coach John Ellis added, "The game itself really shook things up for how we plan to approach Saturday, some players made us stand up and take notice. It certainly hasn't made picking the Test side any easier."

Saturday is the final game of the Lionhearts 2016 Canadian Tour when they travel to downtown Toronto to take on the Canadian Wolverines at the Lamport Stadium (7:00PM kick off). Tickets are available from http://www.torontoticket.ca. 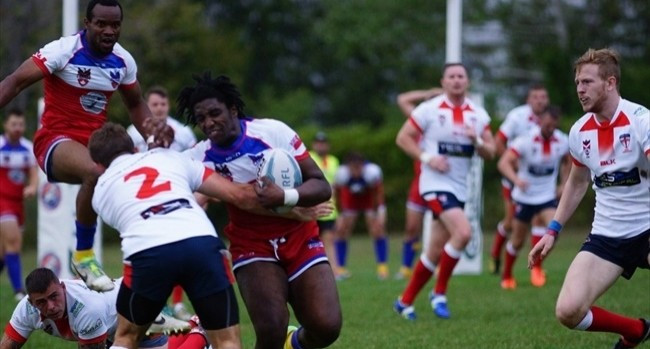