England were comprehensively beaten by a clinical Australia at London Stadium as their Four Nations campaign ended in miserable fashion.

The home team needed to avoid defeat to reach the final at Anfield next weekend but, after taking an early lead, they were comprehensively outplayed by a team that superbly built pressure and cruelly exposed their opponent's weaknesses.

England led 6-2 at the half-hour mark after both teams had kicked penalties, before Jermaine McGillvary collected a pass from Jonny Lomax and touched down in the corner.

But Australia continued to build pressure and dominate territorially - and eventually scored when a brilliant pass from full-back Darius Boyd saw Blake Ferguson touch down out wide. Johnathan Thurston was magnificent with his boot and scored with the last kick of the opening half after yet another England penalty as the Kangaroos opened up a 10-6 advantage at the break.

Sam Burgess could not quite collect a pass from Josh Hodgson under the sticks shortly after the restart, and within minutes England trailed by 10 after Greg Inglis scored from a scrum.

Back-to-back tries in quick succession from Matt Scott, who barged over, and Josh Dugan, who finished a break, took the match away from their opponents. Gareth Widdop scored to make it 28-12 but Matt Gillett barged over for the Kangaroos and England's frustration boiled over when skipper Burgess punched David Klemmer.

Ryan Hall touched down in the corner for England, before Valentine Holmes did likewise for the Kangaroos as the green and gold won by 18 points in front of 35,569. 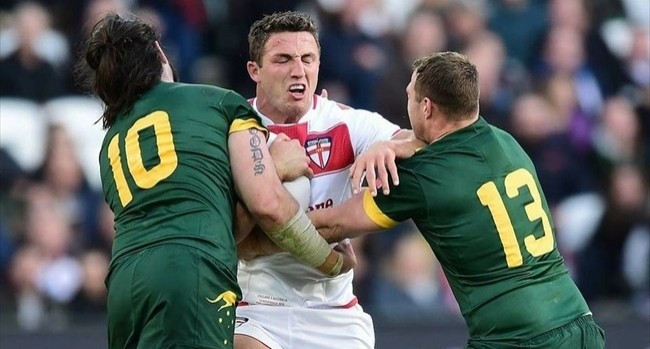