New Zealand half-back Shaun Johnson was again the scourge of England as they fell agonisingly short in their Ladbrokes Four Nations opener in Huddersfield.

The man who broke English hearts in the 2013 World Cup semi-final returned to haunt them in his first game back in the country by orchestrating a 17-16 victory for New Zealand. Johnson ran the show throughout and came up with the crucial scores, a 70-metre interception try and the winning drop goal, to put the Kiwis in sight of the Anfield final and leave England with the onerous task of beating Australia to give themselves a chance of glory.

The narrow defeat spoiled the homecoming of new England skipper Sam Burgess, who produced a typically forceful display in a thrilling clash at a sold out John Smith's Stadium, which was marred only in the late stages when he twice over-played in his side's desperate, frantic bid to snatch the spoils.

Burgess typically led from the front from the start, forcing Kiwis prop Jared Waerea-Hargreaves to cough up the ball with a crunching tackle that set the tone for a no-holds barred first half.

England dominated the opening 25 minutes but only had two penalties from the boot of Gareth Widdop to show for their admirable efforts. Right winger Jermaine McGillvary had a couple of half-chances on his home ground, second rower John Bateman was held up over the line and impressive prop James Graham had a try disallowed for a double movement.

The tide appeared to turn on video referee Bernard Sutton's decision to disallow Graham's effort as the New Zealanders secured a foothold in the game, aided by a run of penalties, one of which was kicked by full-back Jordan Kahu to halve England's lead.

Centre Solomone Kata was then denied a try by Sutton, who ruled England full-back Jonny Lomax got a hand to Johnson's grubber kick to make the ball dead, but the pressure finally told six minutes before the break when Johnson and Kahu combined to create the space to work Rapana over at the corner.

That enabled the Kiwis to turn around 6-4 in front and they doubled their score within two minutes of the re-start when Johnson intercepted Widdop's pass and held off the pursing Luke Gale to touch down at the corner. Kahu added the difficult conversion but England responded immediately, with McGillvary taking second rower Elliott Whitehead's pass and wrong-footing the defenders to cross wide out for a try goaled by Widdop.

At that point Bennett opted to give his skipper a breather and, from having all three Burgess brothers on the pitch, there was none and perhaps it was no coincidence that they conceded a third try in their absence.

A superb offload from substitute forward Manu Ma'u got Rapana into space and he trampled over Lomax to score his second try. Kahu's conversion attempt re-bounded off an upright, which kept England within a score, and it was all square on the hour after a couple of instinctive plays.

An overhead flick pass from Widdop got winger Ryan Hall into his stride and his diving, one-handed finish brought him his 29th try in as many appearances for his country.

Widdop's touchline conversion made it 16-16 but Johnson edged his side back in front with a 65th-minute drop goal which, despite the efforts of Burgess, proved to be the final act of a pulsating match. 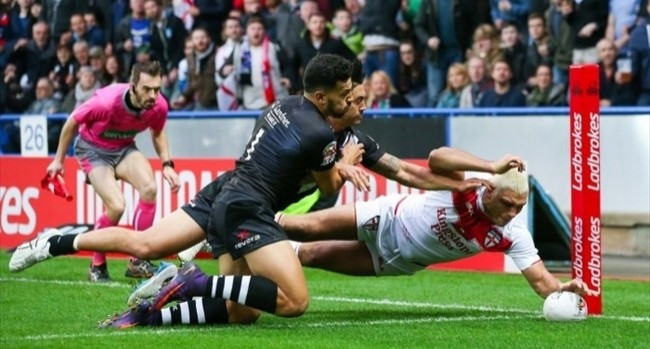