The Canada Wolverines have beaten the USA Hawks 2 -0 in this year’s Colonial Cup series after displaying a courageous effort in their 34 - 28 victory in Philadelphia on Sunday.

The Wolverines went into the match leading the series 1 - 0 after a similar score in game one of the two-match series, 36 - 28. The 8-point difference meant that the Hawks needed to win game two by at least 9 points to win back the Colonial Cup after Canada won the cup for the first time last year in a one-off game played in Toronto.

It was the USA Hawks that got off to a better start as a strong head wind and a string of penalties against the Wolverines made it challenging for them to gain good field position. The first points came after 22 minutes when Timpano successfully kicked a penalty for the Hawks. It was not long after when speedy fullback Ryan Burroughs finally cracked the Canadian defensive line with some strong footwork and a clean pair of heels taking him 40 meters for the first try of the match. The successful conversion made it 8 - 0 to the Hawks.

Canada’s first penalty came in the 25th minute which provided them with their best attacking opportunity of the match. Some slick handling created enough space for Eddie Bilborough to go over in the corner. The missed conversion made the score 8 - 4. Minutes later, the Wolverines were at it again with a replay of the first try sent Bilborough in for his second. This time Piatek was successful with the conversion, bringing the score to 10 – 8.

Another penalty in Canada’s favour, again sent them upfield, this time it was Steve Piatek that took advantage of some sliding defense with a sly show and go taking him straight through the USA defense to score under the posts. Piatek converting his own try and Canada now lead 16 - 8.

With half-time quickly approaching, out of nowhere, a USA 3rd tackle kick fell into the arms of USA’s chasing fullback who beat the cover defense to bring the Hawks within two at the halfway mark.

Coming out of the sheds at halftime, the Wolverines took to the field with a 16 - 12 lead.The Wolverines quickly gained the upper hand with some strong hit ups from the forwards supported by great kicking from Steve Piatek that saw the USA Hawks forced into dropping out from under their posts or having to run out from their own line. This pressure finally told when after a good offload from Christian Miller, saw Eddie Bilborough run through a huge gap to score beside the posts. Piatek successful with the conversion again.

The Wolverines extending their lead to 22-12.Billborough’s try was followed a few minutes later when on the back of a strong Alex Boyd run, Wolverines. Captain Matt Wyles caught the Hawks defence napping and went over from dummy half. Piatek again successful with the conversion. Canada 28 USA 12. The USA Hawks were next to score with a try to substitute winger Roman Lowery of a Luke Baron kick. Timpano converted and the Wolverines now lead 28 – 18.

The Wolverines quickly replied when Wamalwa picked up a Matt Wyles offload and scored beside the uprights. Piatek converted and the Wolverines extended their lead to 34 – 18. The game finished with two consolation tries to the USA Hawks, Roman Lowery with the last try as time expiried, Mike Timpano converting the first.

The final score 34-28 and a well-deserved and dominant Game 2 win for the Canada Wolverines. The Wolverines creating history by taking both games in the series and retaining the Colonial Cup trophy for the second year in a row.

Coach Jamie Lester had this to say about the result, “It was extremely pleasing to see the boys come away from quite a bit of adversity in the first half to get the result we wanted. In the past we haven’t been able to sustain that much pressure, so to overcome that and be leading at the break was testament to how far they’ve come. Everybody put their hand up today, I am really proud of what they have achieved”. 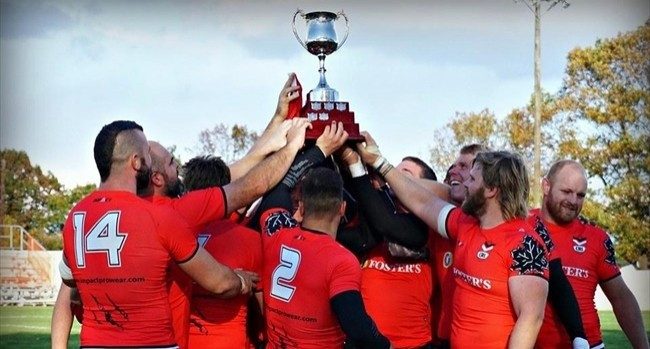