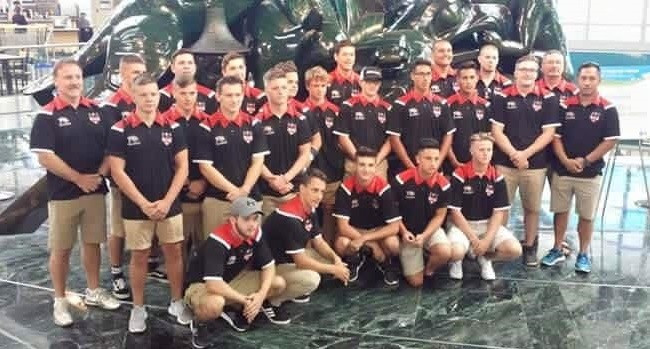 The Canada National U17 Team arrived in Jamaica on Monday August 23, for a historic 6 day tour of the island. The 36 member travelling contingent includes 23 players, management staff and supporters. They will based at Rooms On The Beach Hotel in Ochi Rios. This marks the first time a Canadian national team is visiting the island.

The Canadians open their account on Wednesday at the Drax Hall Sports Complex in St. Ann when they participate in a 9-a-side competition against 4 local high school teams, Spanish Town High, Oracabessa High, BB Coke High and Bog Walk High.

Their playing schedule will culminate with a test match against the Jamaica U17 team on Saturday August 27, at the Barbican Football Complex at 4:30pm. The Jamaica team is coached by Shane Brown who also coaches Spanish Town High School. He is assisted by Stephen Scott, coach at St. Catherine High. Meanwhile, the man responsible for reviving rural rugby league , Derone Davis, coach at Oracabessa High School, is the team manager.

Director of Rugby at the Jamaica Rugby League Association, Romeo Monteith, commented: "We welcome Canada, once more they have shown like us, that the development of rugby league in our hemisphere is a serious matter. It's historical in its scope and the game can only go from strength to strength in both countries. It's vital for both countries that we develop our next generation of players, and this tour is facilitating this process. This tour has given us the opportunity to utilize the skill sets of our high school coaches who have worked hard to prepare our team. "

Canada's team Manager Andy Blackburn said: "Canada Young Wolverines (u17s) are excited to embark on their first ever junior rugby league tour, where Canada will play its first ever game of the full 13 a-side version of rugby league. Our aim is to not only help our close Jamaican friends develop the game further in Jamaica, but to expose our young Canadian players to some rich Caribbean culture and learn more about the great game of rugby league and it's 2 exciting versions of 9s and 13s."